Various types of bacteria live together and form an ecosystem in the bowels, which is called enteral flora. Lactic acid bacteria are human health improving bacterium which produce lactic acid by digesting sugar. These bacteria are essential for the efficacy of digestion and dermatitis. They are considered as the ‘first runner of the modern medicine’ with several other promises yet to be elucidated. Basic information such as the influence on epigenome and cell function of the intestinal epithelium cells by the lactic acid bacterium (LAB) is also hardly studied.

We are interested to check the symbiotic relationship between the human dermal fibroblast (HDF) cells and LAB. In culture condition, the cell which incorporated a LAB formed an embryonic stem cell like cell cluster. In addition, that cell cluster also differentiated into various multipotent stem cells of differentgerml origins. Microarray analysis shows that the gene cluster are more multipotent than HDF cells evident by the expression of NANOG and is expected to increase the cell cluster. On the other hand, the HOX gene cluster which is responsible for the anterior-posterior patterning of the body, is down regulated. (Ohta et at 2012.) Currently our lab is investigating the specific reprogramming factor derived from LAB which is responsible for the generation of multipotency (Ito et al., in preparation). 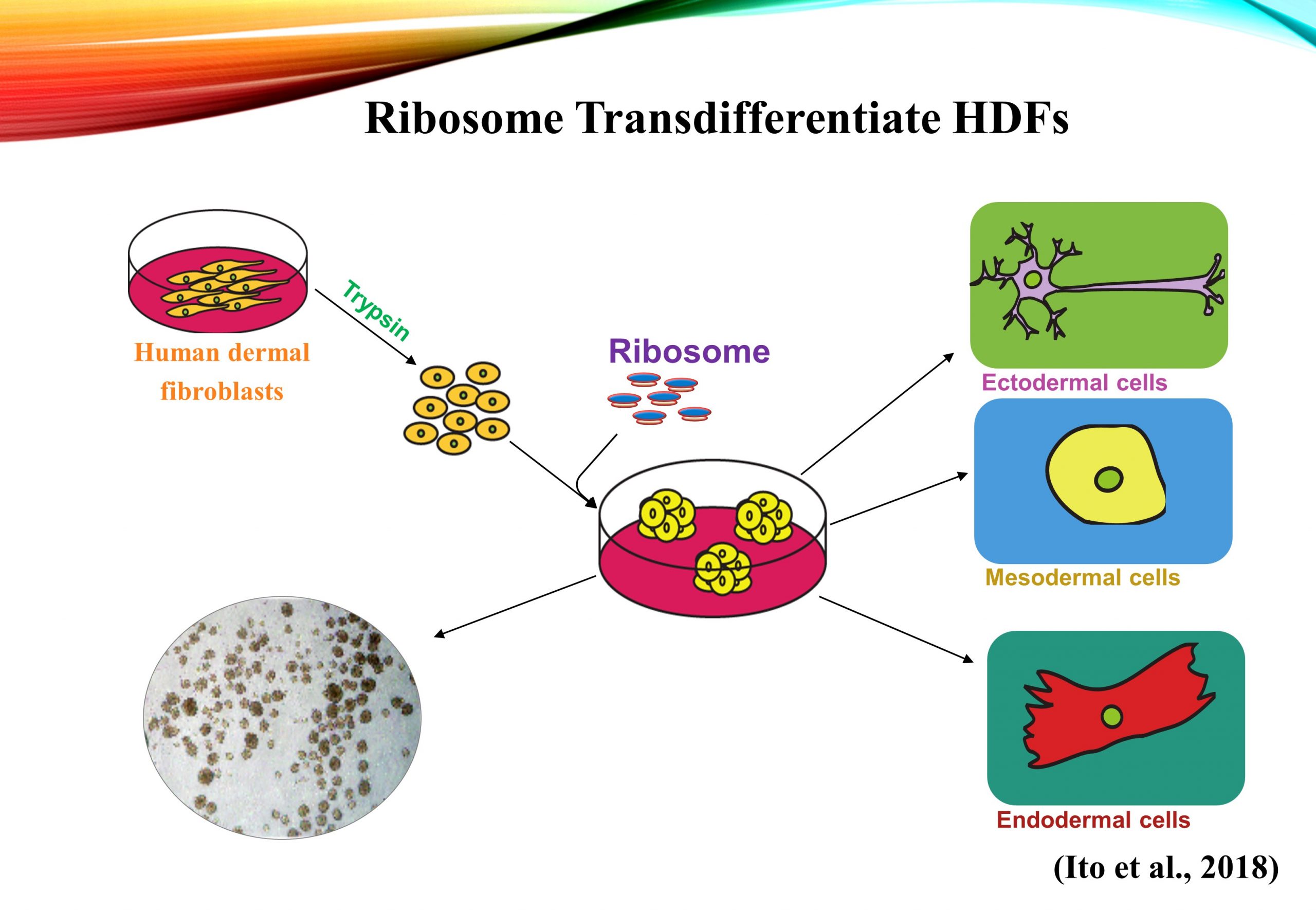 In the central nervous system of mouse brain, Tsukushi is expressed in lateral-ventricle and hippocamal dentate gyrus. TSK is also found to express in ciliary body, retinal stem cell and olfactory bulb. TSK is responsible for the development, differentiation and proliferation of retinal stem cells and act as Wnt signal inhibitor (Ohta et al., PNAS 2011). TSK is also expected to have similar function in neuronal stem cell (Riyadh et al., in preparation).

By analyzing TSK knockout mouse, it was found that TSK participates in the neural network formation (Ito et al., BBRC 2010; Hossain et al., Dev. Biol. 2013), hair stem cell development and wound healing of skin (Niimori et al., Dev. Biol. 2012). It is also reported that TSK is responsible for various phenomenon as the extracellular mediator and controls a variety of signal transmission in the extracellular domain. 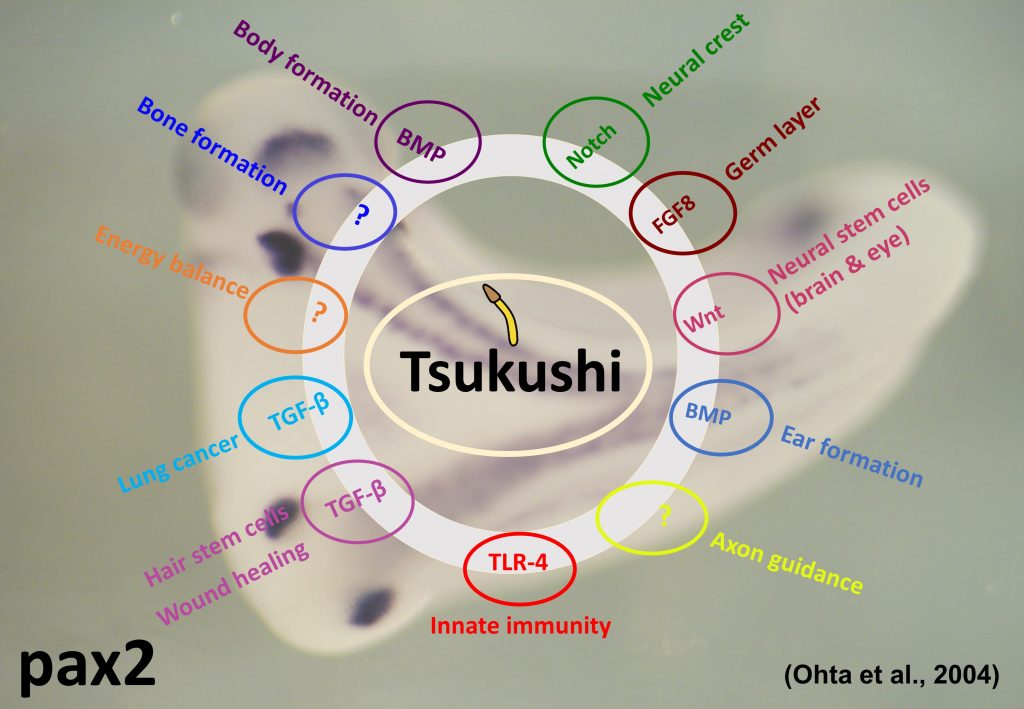 Akhirin was also discovered and named in this lab. Akhirin was first found in chicken eye and generated by the signal sequence trap (SST) cloning (Ahsan et al., Dev. Dyn. 2005). The word Akhirin comes from the Bengali word ‘Akhi’ which means ‘Eye’.

Akhirin consists of LCCL (Limulus factor C, Coch-5b2 and Lgl1) domain and VWF domain which has cell adhesion properties. It is considered as a secreted protein originated from the vitreous body of eyes and homologous to vitrin and cochlin (Mayne et al., 1999). It is secreted out of Cos-7 cells, but adheres to the cell surface and shows heterophilic adhesion activity. In chick retina it is specifically expressesd in the ciliary marginal zone (CMZ) and acts as a niche molecule.

Akhirin is also responsible for the development, differentiation and proliferation of chick and mouse spinal cord (Athary et al., Dev. Neurobiol. 2015). Akhirin is also expected to perform the molecular role in the mise sub-ventricular zone. 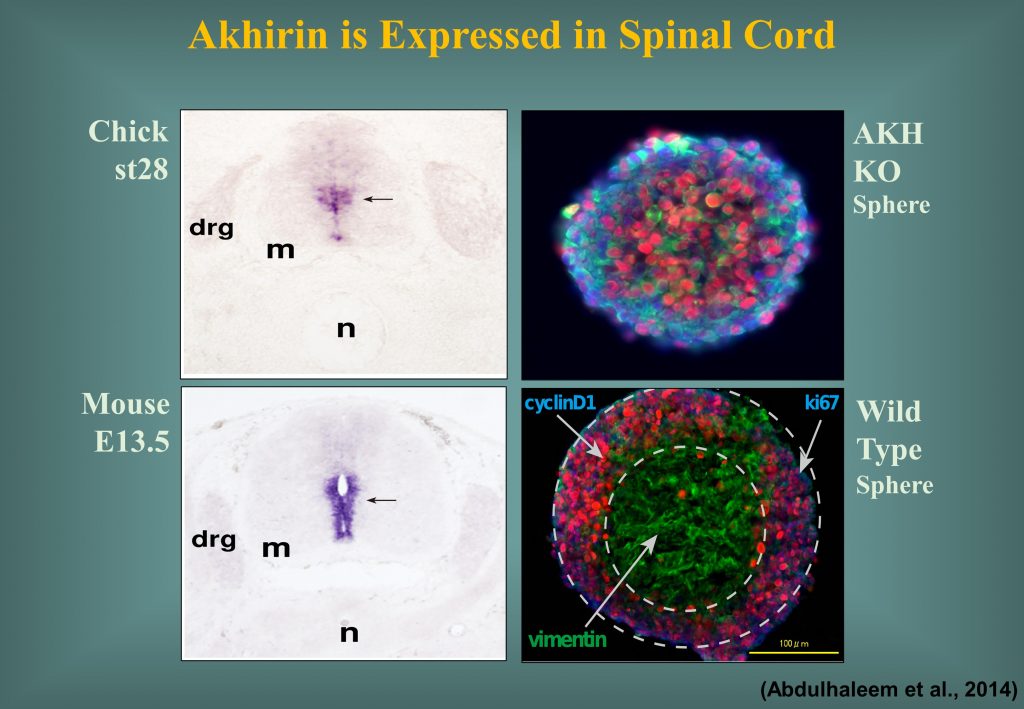